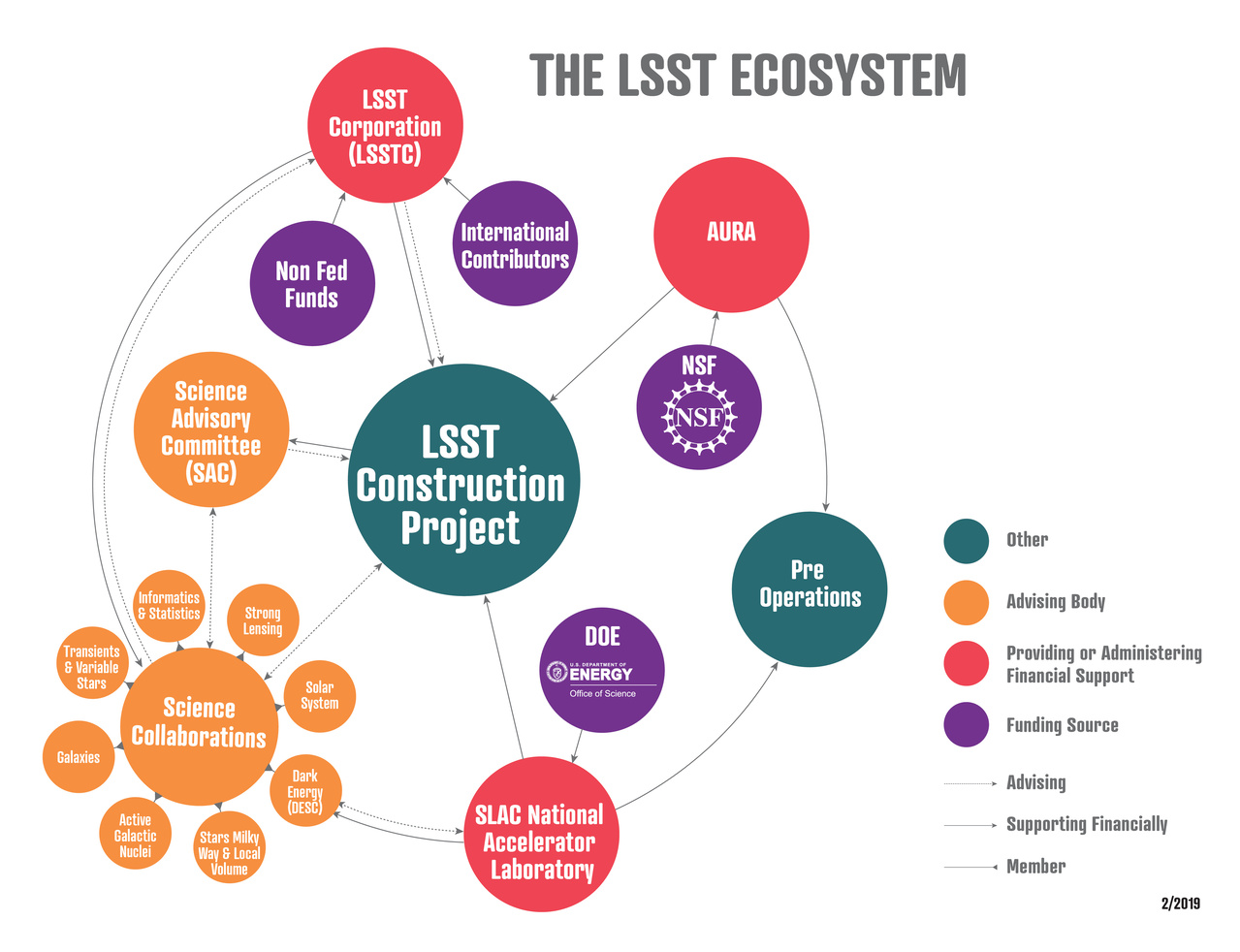 The effort to build Rubin Observatory is a partnership between public and private organizations. Financial support for Rubin Observatory construction comes from the National Science Foundation, the Department of Energy, and private funding raised by the LSST Corporation, a non-profit 501(c)3 corporation formed in 2003, with headquarters in Tucson, AZ.  Contributions from private foundation gifts, grants to universities, and in-kind support from laboratories and other LSST Member Institutions were key to early construction and critical developments.

The National Science Foundation is the lead federal agency for Rubin Observatory construction and provides support for the telescope and site facility construction, the data management system, and the education and public outreach components.  The Department of Energy supports the camera fabrication. The DOE-funded effort to build the LSST Camera is managed by the SLAC National Accelerator Laboratory (SLAC).

After the start of federal construction, the privately-funded LSST Corporation (LSSTC) focused on Enabling Science by helping the community prepare to maximize the science impact of Rubin Observatory.  LSSTC supports Science Collaborations in pre-survey activities and also builds agreements with international affiliates that contribute to support of LSST operations.

Rubin Observatory has a Science Advisory Committee, which represents the scientific community, and advises the Director on matters of policy and science decisions that come up during construction.

Financial support for Rubin Observatory comes from the National Science Foundation (NSF) through Cooperative Agreement No. 1258333, the Department of Energy (DOE) Office of Science under Contract No. DE-AC02-76SF00515, and private funding raised by the LSST Corporation. The NSF-funded Rubin Observatory Project Office for construction was established as an operating center under management of the Association of Universities for Research in Astronomy (AURA).  The DOE-funded effort to build the Rubin Observatory LSST Camera (LSSTCam) is managed by the SLAC National Accelerator Laboratory (SLAC).
The National Science Foundation (NSF) is an independent federal agency created by Congress in 1950 to promote the progress of science. NSF supports basic research and people to create knowledge that transforms the future.
NSF and DOE will continue to support Rubin Observatory in its Operations phase. They will also provide support for scientific research with LSST data.